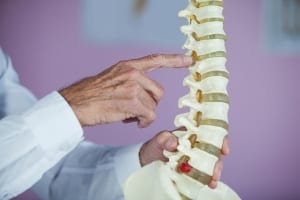 The vertebrae that make up the human spine are separated by natural “shock absorbers”, a type of elastic lining called intervertebral discs. The discs are made of a soft, viscous fluid retained within a thin envelope, allowing full movement of the vertebrae, full stability of the back and efficient shock absorbance. Under normal circumstances, the soft viscous fluid is well retained within the envelope of the disc. Various factors (including lifting heavy weights and engaging in certain sports) could cause the creation of ruptures in the envelope, with the fluid herniating outside of the disc. In such a situation, pressure may be exerted on nerves in proximity to the disc – which in advanced stages could be defined as a medical emergency. In such an instance, one of the tools at the disposal of the health care team is a procedure called disc nucleoplasty.

The intervertebral disc is located in one of the most sensitive locations in the body – the region where the spinal cord is located, from which the nerve roots branch out to all parts of the body. The spine is built like an exact puzzle, with each “piece” perfectly matching the adjacent piece. Therefore, in the space between vertebrae, there is almost no empty space. Thus, when the shape of the envelope changes, especially when the disc fluid escapes to outside of the disc (which is defined as a herniated disc), this could have a direct effect on the pressure exerted on everything in the region, especially on the most sensitive component: the nerves.

Significant disc herniation could exert physical pressure on certain nerves leaving the spinal cord leading out from the adjacent spinal cord, and in rare instances, even on the spinal cord itself. The significance of such pressure is impaired nerve function, manifesting as a sensation of pain, pins-and-needles sensation, loss of control over muscles and even paralysis of a body part to which the injured nerve leads. Any of these symptoms would usually be defined as a case that requires medical intervention.

The decision to perform disc nucleoplasty

Usually, when it appears that the patient is suffering from a problem stemming from an intervertebral disc, he will be referred first and foremost for conservative treatment, in order to try to improve his condition naturally, without significant intervention. It is important to remember that the disc – and primarily its internal layers – is able to heal by itself during rest when the patient is careful with proper back movements. Therefore, prolonged rest usually will be recommended initially, which could help solve the problem.

In case these solutions do not help, the patient will be given various medicines to relieve the pain, including of course pain killers, as well as steroids, anti-inflammatory medicines, and more. At this stage, most people suffering from back pain will experience in improvement in their condition. Intermediate between the stage of conservative treatment and the stage of spinal surgery is an additional option, namely disc nucleoplasty. The process of disc nucleoplasty can solve the problem of disc herniation, relieve the pain and avoid an open operation.

About the procedure itself, hospitalization and recovery

There are currently two methods of disc nucleoplasty:

The two methods are similar and take about 10 minutes, are performed under local anesthesia and sedation, without risks of neurological damage, because the needle is inserted from the direction where there are no nerves. Patients are discharged to their homes and to full function immediately. Success rates are 70%-80%. The disc nucleoplasty procedure is performed under local anesthesia only, with sedatives also being administered to the patient in parallel just before the procedure is performed. He will thus remain awake but with clouded consciousness, and is not expected to feel anything until the completion of the treatment. After the local anesthesia and administration of sedatives to the patient, a thin needle will be introduced (with no incision), through which the disc can be aspired/cauterized, relieving the pressure created in the area. The procedure is performed in a precise manner while the surgeon is viewing a large screen (x-ray imaging): the treated area is imaged in real-time throughout all stages of the procedure. The physician advances the needle to the herniated disc, guided by the imaging, thus ensuring direct access to the point at which the fluid is located that is to be aspired/cauterized. About an hour after the procedure is completed, the patient is discharged to his home and to regular function. Only in the event that there is no improvement, he will be given an appointment for a follow-up visit with the treating physician.

For advice and further information, contact us at telephone: +972-9-959-4888, or leave your details and we will get back to you promptly.