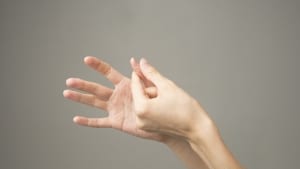 Some two percent of the population may suffer from a condition called trigger finger – in which the finger ‘gets stuck’ in a bent position, resembling the situation in which the trigger of a live weapon is being pulled, and does not easily straighten out. In the most severe cases, it never straightens out, and in addition to all the unpleasantness that this causes, it could also hurt.

The occurrence of trigger finger is caused by changes that are substantially degenerative: if the finger tendons thicken, or if the sheath through which they pass becomes more narrow, the tendons ‘get stuck’ in the pulleys – natural loops with which the tendon sheath is held close to the finger bones. The tendon could get stuck for a few moments, and could even stay like that on a fixed basis, with the finger bent and unable to straighten out.

Trigger finger is characteristic mainly of the thumb and of the index finger, but it can occur in any of the fingers. It is more common in women, and occurs mainly between the ages of 40 and 60, and is therefore thought to be a problem originating in degenerative changes of the body. However, it is assumed that load and exertion encourage the aggravation of the condition. In all events, the most effective treatment for trigger finger is an operation.

If a case of trigger finger is discovered, the physician will first of all attempt to treat it using conservative treatments. Anti-inflammatory medicines can sometimes help to improve the condition, as can general rest of the hand. The finger may sometimes be placed in a special splint for a period of time, which could also help. However, many of the conservative treatments help only for a limited time, or only partially. If that is the case, hand surgery will be most effective.

The operation is considered to be relatively easy and rapid – it takes only a few minutes, and is performed under local anesthesia. After the procedure and at the completion of the recovery period, the condition disappears completely in most cases. The success rate of trigger finger surgery is currently over 97%.

No special preparation is required for trigger finger surgery, as it is a procedure that is performed under local anesthesia, and in a body part that is distant from the center of the body.

Before the operation, the physician will diagnose your condition, in order to find out what the source of the problem is and how severe it is. This diagnosis will later enable him to perform the operation in the most rapid and effective manner. Firstly, the physician will anesthetize the surgical area, usually with an injection of a special gel. After the location is ‘numb’, the operation will begin: a small incision, up to some two centimeters in length, will be made at the location where the tendon ‘gets stuck’. In order to enable smooth movement of the tendon, the physician will widen the sheath through which it passes, thus in effect enabling free movement immediately. After a few minutes, the operation will be completed, and you will usually be discharged to your home already on the same day.

It is, of course, important not to intensively use your finger immediately on completion of the operation (not to mention the fact that it will still be ‘numb’, with only partial control). On the other hand, it is important to use the finger throughout the recovery period, cautiously but diligently, as well as the neighboring fingers.

For two weeks after the operation, the finger will remain bandaged, and you will not be able to moisten the area of the operation. The hand will be placed in a special splint during these two weeks so that it remains higher than the level of the heart. In addition to making sure to continually move the fingers, it is also important to be sure that the elbow and shoulder move during the recovery days, in order to not cause ‘stiffening’ in the absence of movement.

You will usually be able to perform a light activity with the operated finger already one or two days after the procedure. During the two weeks following the operation, it is important not to exert the hand and also not to drive, and to gradually resume full activity.

It should be noted that the process of complete recovery of the operated finger will be relatively long -until it returns to full fitness, with no impairment of action of the tendon. This process could sometimes take a year, during which you will be referred for physiotherapy treatments to strengthen the finger and to make sure that it is moving in a normal manner.

This simple operation comes with few and quite rare side effects: hemorrhages (a common effect after such an operation), infection at the site of the operation, injury to blood vessels or to nerves in the area of the operation, and recurrence of trigger finger in spite of the treatment. In case of recurrence of the condition, an additional similar operation can be performed, but it is important to remember that these are relatively rare instances.