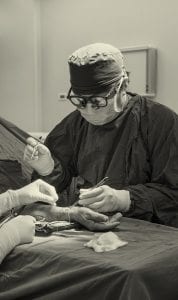 Fistula is sort of a subcutaneous canal that develops due to abscess and might cause pain where it develops.  Many fistulas develop near the anus and cause pain while sitting or defecating. Since the fistula doesn’t usually go away on its own, treatment is required, which would usually be surgical.

The fistula, as said, develops usually due to abscess in the area: the abscess, a festering and painful sore, creates sort of a “new” space between the tissues, where it develops, and after it’s drained and has disappeared, this opening might not close (usually because it wasn’t treated properly or completely cleaned of puss). In this spot, the fistula develops, sort of a canal that remains under the skin and might accumulate bacteria, secrete puss and cause pain. It should be noted that fistula would not develop necessarily alongside an abscess, but a few weeks after it – and sometimes even months and years.

Fistula development might cause pain where it’s located, an itch, irritation and discomfort, puss secretion in the buttocks area and bloody stool.

In general, fistula treatment surgery isn’t particularly complicated. It usually lasts less than half an hour and is often done under regional and not general anesthesia. Recovery isn’t long either, but it depends on the case, the severity and depth of the fistula.

There are cases where the fistula doesn’t appear as one canal only but is comprised of several joint ‘canals’. In other cases, it might develop deep in the tissue, where there are many muscles – the rectal muscles. Such cases make treatment more complex and often might even require reconstruction of the rectal muscles after fistula treatment, which would require a long surgical procedure and longer recovery as well.

If this is a surgery that will be done under general anesthesia, you will need to fast several hours before it. Regardless of the anesthesia type, you’ll need to empty your bowel before the surgery (using laxatives or a ‘small enema’, for example). In certain cases, you’ll undergo imaging tests (MRI or CT for example) that will aid the doctor in diagnosing the problem.

After performing the anesthesia (general or regional – spinal) the surgery will begin. The doctor will first examine the nature of the fistula, its depth, and circumference, and only then decide what surgery to perform. If this is one fistula, which is relatively close to the skin, the doctor will cut it off and sometimes tissues around it, and in fact, end the problem.

If this is a fistula that is deep in the rectal muscles, more complex surgery is required to ensure minimal damage to the function of those muscles in the future. The doctor has several options available to him in this case, among them is “transplant” of tissues from the rectum in the inner opening of the fistula, leading to its occlusion and “death”; injection of biological glue into the canal, sealing it; and threading a special seton thread along the canal. This is a loop-shaped thread that allows draining of the puss from the canal and is also used for gentle, careful and gradual cutting of the fistula and the muscle tissues around it. The slow cutting allows the muscle tissues to heal, so they are not irreversibly damaged. In such cases of concern for rectal muscle damage, the surgery might include several stages and treatments that would last a few weeks and months.

As said, the surgery would usually be short and last about 20 minutes, unless this is a more complicated case. You’re expected to discharge that same day or the next day. In the first few weeks after the surgery, it’s recommended to make sure to eat food with lots of fiber and to drink a lot to ensure soft stool and easy defecation, as constipation might hurt the efficacy of the surgery.

Side effects after fistula surgery

After fistula surgery, you might experience pain for at most two weeks. The bloody stool might also appear sometimes, but this is common and passing. The fistula itself might develop again in the area where it was discovered, but these aren’t particularly common cases. The most severe risk in this surgery is damage to those rectal muscles, which could cause loss of bowel control and would require surgery to fix the problem. However, these are fairly rare cases.