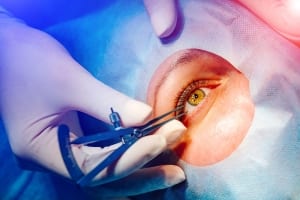 Ptosis can appear in both eyes at the same time, or in one eye only. Although this is a seemingly “small” problem, in an organ that isn’t large, it could cause many problems. First, an eyelid that drops severely might hurt the vision field, cause blurry vision (due to development of astigmatism) and lead to lazy eye or cross-eye.

Besides that, the eyelid’s condition makes many people suffering from the condition to slightly tilt their head up regularly to see better, which could cause neck and back pain. In addition, the mere attempt to keep the eye as open as possible can lead to a constant feeling of tiredness or the eyes and hurt reading, for example. Therefore, a case of ptosis would require in a certain condition, almost always, to undergo eyelid correction surgery.

The causes for eyelid drooping or very large eyelids: congenital defect in the muscles operating the eyelid, growths that interfere with its complete opening, external injuries that caused a dysfunction in the eyelid operation, damage to the nerve that operates the eyelid muscles, accumulation of skin around the eyelids which weighs their activity, ‘material fatigue’ also relating to the activity of the eyelid muscles and usually occurs in older age and various diseases that hurt the body’s muscles (for example: Myasthenia Gravis).

When will eyelid correction surgery be decided on for health reasons? Mostly when the problem is very serious and causes real disruption of the patient’s daily conduct. The surgery itself is not complicated and can be performed in very young ages as well, but if it’s not an especially serious condition, we usually wait a few years, until the child grows up, before having the surgery.

In adults, the surgery will be performed under localized anesthesia only, so for this aspect, they don’t need special preparation. Babies and small children will be operated on under complete anesthesia and will have to fast several hours before the surgery. A few days before performing the procedure, an eye exam will take place and a diagnosis of the specific factor causing the problem.

The way in which the eyelid correction surgery will be performed depends on the cause of the problem. Most surgeries include connecting the eyelid muscle to the tarsus, which restores the proper function of the muscle. If the decreased activity of the muscle was diagnosed, it will be shortened and thus restored to provide the strength necessary to fully lift the eyelid. In very serious cases, flap implant surgery will be performed, during which the eyelid will be connected to the eyebrow muscles. In such cases, closing the eyelid will be done by moving the eyebrow.

The surgery is considered relatively simple and has high rates of success. It lasts about 2 hours at most.

Patients who have undergone the surgery under localized anesthesia will be discharged that day. Infants and small children will remain for supervision for 24 hours, due to the general anesthesia they were under. Swelling in the surgery area, feeling pressure, dryness in the eye or secretion of fluids from the eye are very common and pass after a short while. Edemas are also possible in the area, which pass on their own. The stitches will be removed after about a week, and the final result will be seen after the recovery process is complete.

Aside from infection and bleeding, and risks related to general anesthesia, it is possible that after the surgery, there will be asymmetry in the appearance of the eyes – one eyelid will look more raised than the other. Other adverse events are over-correction or under-correction of the ptosis, but all of these problems can be fixed in another surgery and are considered very rare, especially when the surgery is performed by an experienced doctor.